The rhetoric of dissent

During our research we were really struck by Clare Higney’s metaphor in her report on the links between community arts and the trade union movement, when she described the community artist as the awkward person ‘standing on the mat in front of the automatic doors – insisting that the door [keeps] opening’ (Higney 1985). Coincidentally, I’d just read comedian and activist Mark Thomas’ book where he describes dissent as ‘a rebuttal of the thin end of the wedge’ and ‘a simple way of saying, No, I do not accept this’ (Thomas 2015). I was also drawn to the writing of Robert L. Ivie who was writing about the difficulties of dissenting in the face of what seemed like monolithic public opinion following the attacks on the US in 2001, now known as 9/11. He described dissent as ‘a mainstay – not a luxury, a nuisance, or a malfunction of democratic governance’ and suggested that ‘without dissent, there is no democratic polity of adversaries and thus no politics, only forced unity and unmitigated enmity’ (Ivie 2005). Having carried out our research, considered the contributions of the other writers in the book, and spoken to a wide variety of people involved in the Community Arts Movement of the 1970s and early 1980s, we concluded that community artists are best thought of as dissenters. 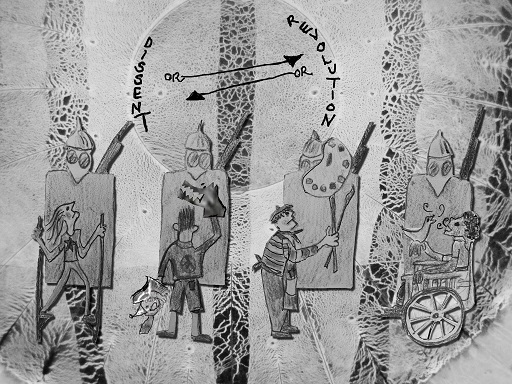 Dissent or Revolution? Illustration for the book by Jennifer Williams

Tactics of dissent – doing what you can with what you have

According to French philosopher De Creteau[i] strategy is available to those with power, while tactics are smaller scale actions carried out by those with less power against the strategies of those who are stronger than them. When we were reading the literature on community arts from the 1970s it appeared that American community activist Saul Alinsky had been influential in the development of community arts in the 1970s (Badder 1983). Alinsky writes that ‘tactics means doing what you can with what you have. Tactics are those consciously deliberate acts by which humans live with each other and deal with the world around them’ (Alinsky 1989). We thought of two examples of tactical approaches from our research – both using every-day, low-tech flashcards! The first one was described by Gerri in her previous blog where she described marching on the arts council with cards that demanded that they ‘fund the dandelions’. The second example of the tactics of dissent was told to us by Graham Marsden who worked at Telford Community Arts, described in this extract from the book.

‘Hearing that the Queen was visiting Telford in the early 1980s, Graham worked with a group of local women to make a composite image of placards that said ‘God Save the Queen’ on one side ‘all regal purple, beautifully lettered with a red, white and blue border’ which they held up as the queen’s car approached. As the car went past, they turned the cards to show the slogan ‘God Help Telford’s 1 in 5 jobless’. Both of these dissenting acts used rhetorical tactics to make their point: the ubiquity of an everyday weed juxtaposed with the decadent individualistic rose to draw attention to inherent unfairness of imbalanced support for different sorts of art; a piece of political opportunism designed to send a message, not just to the queen but to the media who the participants hoped would pick up on the story – which they did. The demonstration and final placard image being used to close coverage of the royal visit, and being shown on all three ITN news bulletins that day, with a combined viewing figure of 18 million.’

Critic Raymond Williams, who was a popular writer at that time (still is too – and quite right!), described the dissenter as a figure ‘who, though he cannot reverse the trends, keeps an alternative vision alive’ (Williams 1961). This seems a great way to look at the work that community artists carried out then and an equally valuable way to see the work of contemporary community artists, arts activists, socially engaged artists (add any other suitable terminology) today.

See the link below for details of the book.

Higney, Clare. 1985. Not a Bed of Roses. Arts Development Officer in the Trade Union Movement (The Gulbenkian Foundation: London).

[i] Come on…I’m an academic – there has to be a French philosopher!

I am an academic working in theatre and performance.
View all posts by alison jeffers →
This entry was posted in Culture, Democracy and the Right to Make Art and tagged dissent, legagcy, research. Bookmark the permalink.

5 Responses to The Dissenters